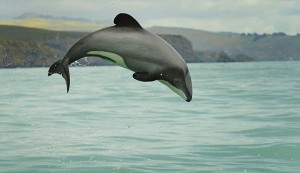 PIC FROM CATERS NEWS – (Pictured a dolphin jumping) The worlds most endangered sea dolphin will do a dodo and die out within years unless radical changes are made to damaging fishing methods, campaigners are warning. Mauis dolphins are found only in shallow waters off New Zealand, where the population has been decimated by trawl and gillnets – huge walls of nylon netting used to catch fish. Most drown after becoming trapped in the heavy duty nylon mesh – and fewer than 22 breeding females are left in the world – meaning the breed faces imminent extinction. Numbers have fallen by 94 per cent since gillnet fishing began in the 1970s, an international conference on whaling in Panama heard this week. The species downfall would be the first known extinction of a marine cetacean as a direct result of human activities. SEE CATERS COPY.