An intensely popular series from the Royal Canadian Mint features its newest release with the 2014 $20 Canada Goose Commemorative Silver Coin. The coin is issued as part of the “Exchange $20 for $20” program which features silver coins sold at their legal tender face values. 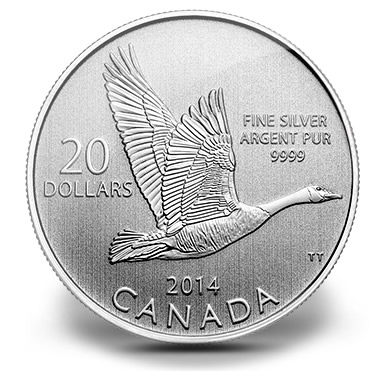 Like other issues in the series, each Canada Goose coin is struck from 99.99% pure silver with a total weight of 7.96 grams. Program coins showcase reverse images commemorating concepts and creatures important to Canadians, in this case the Canada Goose.

A maximum mintage of 225,000 will be sold by the Royal Canadian Mint. Previous silver coins from the series featured mintages ranging from 200,000 to 250,000, as shown in the chart below, with all of them selling out.

A similar $100 for $100 silver coin series is also issued by the RCM. Its newest release, the 2014 $100 Bald Eagle Silver Coin will debut soon. Look for more details to follow.

Trevor Tennant designed the image shown on reverses of the silver coins which show an impressive Canada Goose in flight. The profile view of the bird offers the opportunity to see the large wing-span as it flies.

Susanna Blunt’s effigy of Queen Elizabeth II graces the obverse of each release. The portrait is surrounded by the inscriptions of “ELIZABETH II” and “D.G. REGINA.”

The 7.96 gram coin equates to just over one-quarter ounce of silver, giving the coin a diameter of 27 mm. Each is struck to specimen quality and ships inside a protective sleeve attached to an illustrated card.