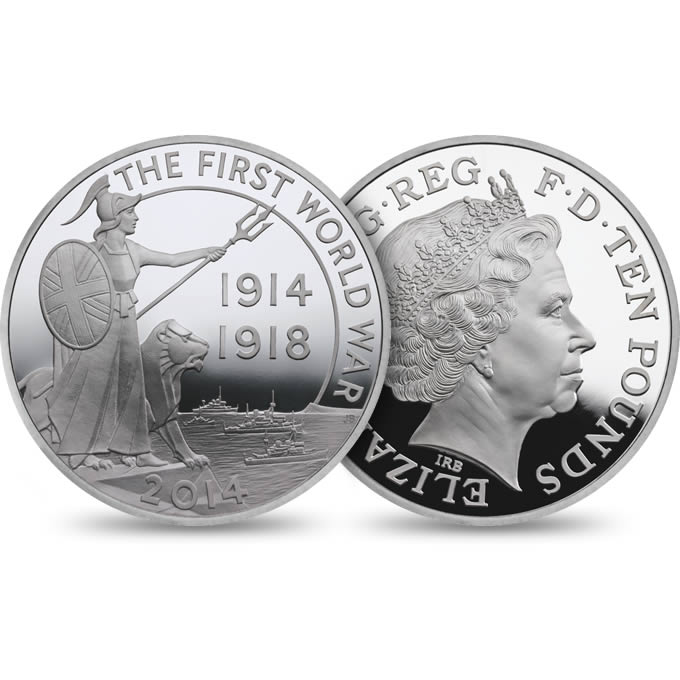 The most successful series of New Zealand Mint product in recent releases.  Both gold and silver coin of the previous release sold out in no time.  Here comes to the second releases – 80th Anniversary of the Donald Duck.  Again, all coins have been allocated to the major distributors and dealers.  We have reserved dozens of the silver piece for our customers and all have been sold out. After the well received releases of the 1oz High Relief, 5oz Standard Silver Proof, the 1oz bullion has come online.  GovMint appears to be the sole international dealer of this version.  They are selling the coin in three grades, MS70 at $99.95, MS69 at $49.95 and Gem BU at $29.95. One of the best designs I have seen in the year of 100th Anniversary of the First World War.  I personally prefer coin designs with imagination than designs transferring directly from photographs.  The second reason is that, most of you may know, I am a superfan of the Britannia who is the signature of Britain’s bullion silver coins.  The only bad news is that it is available in 5oz proof which costs GBP395.

Celebrating the Centenary of the Panama Canal

The Panama Canal is a 77.1-kilometre ship canal in Panama that connects the Atlantic Ocean (via the Caribbean Sea) to the Pacific Ocean. The canal cuts across the Isthmus of Panama and is a key conduit for international maritime trade. Annual traffic has risen from about 1,000 ships when the canal opened in 1914, to 14,702 vessels in 2008. The American Society of Civil Engineers has named the Panama Canal one of the seven wonders of the modern world.  The 1oz silver coin has a latent image on the reverse and selective colouring on the obverse.  The round presentation box is in the form of a nautical compass which look superb.  We will make it available in our pre-order list very soon.

Italy takes the rotating presidency of the Council of the European Union, where governments are represented in the EU decision-making, over from Greece on 1 July. The obverse of the coin depicts the classically beautiful face of the Goddess Ceres with a crown of spikes on her head, chosen as a symbol of fertility. The subject on the reverse side is taken from Ovid’s ‘Metamorphoses’, which tells how the princess Europa was carried away from the coastal region of Tyre by the god Zeus who had transformed himself into a bull. We see her mounting the beast side-saddle in the foreground, and being carried away toward the sea in the lower left corner.