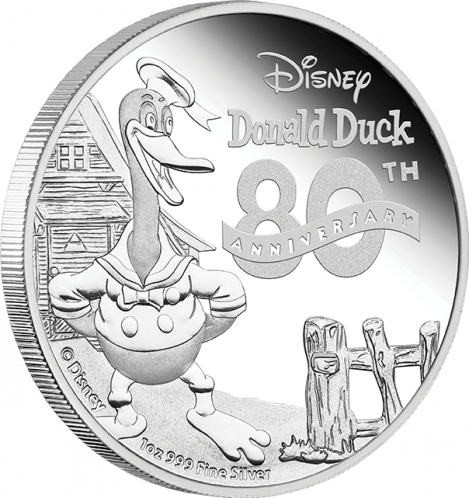 The 2nd release of the Disney series announced by the New Zealand Mint this week.  These Limited Edition Collectible coins will appeal to serious Disney and D23 fans seeking quality Disney memorabilia, as well as those looking for a unique gift.  The gold coin has been sold out by the Mint in hours, and believe the silver coin will be sold quickly as well. Donald Fauntleroy Duck is one of the most beloved Disney characters, first appearing in the cartoon The Wise Little Hen, released in 1934. Throughout the next two decades, Donald appeared in over 150 theatrical releases, several of which were recognized at the Academy Awards. An anthropomorphic white duck, with a yellow bill and feet, Donald wears a sailor suit with a bow tie. Famous for his semi-intelligible speech and his mischievous and irritable personality, Donald has a positive outlook on life and is devoted to his friends. Included in TV Guide’s greatest cartoon characters of all time, Donald has appeared in a total of 178 films, more than any other Disney character.

Place your order now, and we will do our best to get sufficient from the Mint.