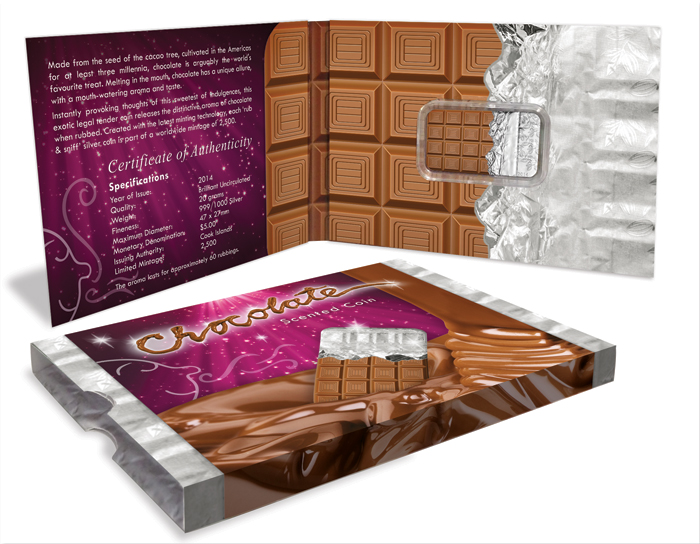 Year of the Goat from Treasures of Oz Treasures of Oz announced the Year of Goat silver coin, available in standard bullion, proof, reverse-proof, coloured, antiqued, gilded and gold versions, with mintages from 1,000 to 300,000. Released on the 1 July will also be a full proof finish coin with a mintage of 2,500. In addition, on 30 July there’ll be antique, gilded and coloured silver coins, as well as a tiny 0.5g gold coin. Apart from the antique finish, which has a 2,000 mintage, all of these variants will top out at 1,000 strikes. The mints always want to make something different and be innovative with the commemorative coins.  Downies has just announced a new 20 grams silver coin which looks like a chocolate bar while it tastes the same too.  It has a mintage of 2,500.

The Redoutable continues the five-year series of “Great French Ships” which started in 2011.  Starting in 2011 with coins featuring the Jeanne D’Arc, The Hermione and the cruise ship, Le France, they continued with a further three in 2012 featuring the La Gloire, L’Amazone and the Pen Duick.  The Redoutable is the first nuclear submarine with a ballistic missile capability to be built in France.  At 128 metres long and weighing 8,000 tons, the vessel served her country for exactly 20 years filled with 15 officers and 120 sailors.  The 22.2 gram silver coin has a mintage of 5,000 pieces. Following the silver bullion coin produced by the Perth Mint last month 1oz Saltwater Crocodile and the 1/2oz Great White Shark, a new bullion has been issued by Tokelau featuring the ocean life of New Zealand.  The first issue of the series would be a Kakahi-Yellow Fin Tuna. The coin is a dedication to “The White Book”, a masterpiece created by an outstanding Latvian writer and painter Jānis Jaunsudrabiņš (1877–1962). This is the 100th collector coin and the second in the collection of euro-denominated coins issued by Latvijas Banka. A new release of the popular Wildlife in Motion series $100 for $100 silver coin.  The previous 3 releases have all been sold out, and this coin has the mintage released by 10% to 45,000, so sold out is expected.