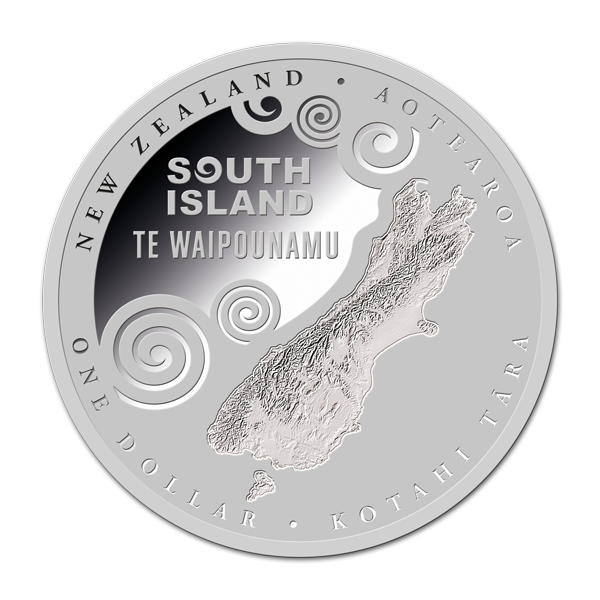 Not one of the most prolific issuers of commemorative gold and silver coins, the New Zealand Post does however, release some beautiful looking coins, as well as the occassional movie licence, like the Hobbit ones in progress now. Quintessentially Kiwi in execution, their coins are issued for New Zealand, unlike the privately owned New Zealand Mint that generally issues for Niue or Fiji, and the subject matter reflects that.

This latest two-coin silver set of excellent design is being released to mark the official naming of New Zealand’s two main islands after it was recently discovered the names currently used came about through popular usage and not from an actual declaration. The English and Maori names were made official in October 2013, so you can now choose from the boring English or unpronounceable Maori versions. Having spent a month there a couple of years ago, I can safely say that no name can do justice to this stunning country. Both North and South Islands are exceptionally beautiful places.

Each of the two coins features a highly detailed topographical map of the island in question that’s been laser-engraved from an actual cartographic image. From the images it looks like a very well detailed piece of work, but we’ll reserve judgement until seeing a set. There’s certainly no denying the coin as a whole works beautifully.

Surrounding the map are Maori-inspired decoration as well as the name of the country, island and denomination in both English and Maori. The obverse features the usual portrait of Queen Elizabeth II by Ian Rank Broadley.

The two coins are housed in a lovely box, apparently made from 45,000 year-old swamp kauri. The design of the box features the names of the provinces and regions of New Zealand intricately laser-engraved into the lid.

Each of the very limited 500 sets comes with a Certificate of Authenticity that also tells the story behind the naming of the islands in both English and Te Reo. The set sells for $299 NZD (approx. £152, $256 USD, €189) and ships in August.