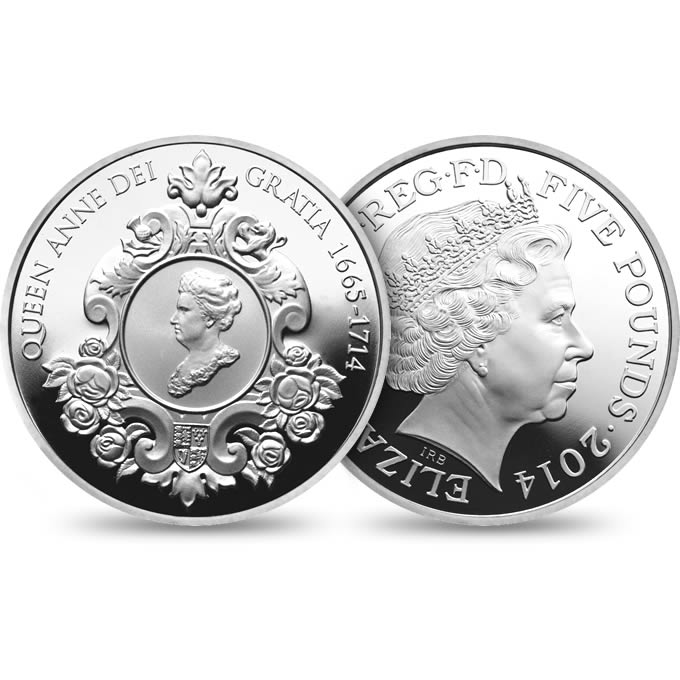 The 300th Anniversary of the Death of Queen Anne Back at the end of January, the Royal Mint released it’s new gold and silver proof coin sets for 2014. One of the coins in the set has now been released in single coin form and it’s the piece commemorating the 300th Anniversary of the Death of Queen Anne.
Queen Anne was the last of the Stuart monarchs, reigning from 08 March 1702 to her death on 01 August 1714. During her reign the kingdoms of England and Scotland merged under the Acts of Union to form a single sovereign state, the Kingdom of Great Britain.

Anne was born in the reign of her uncle Charles II, who had no legitimate children. Her father, James, was first in line to the throne. His Catholicism was unpopular in England and on Charles’s instructions Anne was raised as a Protestant. Three years after he succeeded Charles, James was deposed in the “Glorious Revolution” of 1688. Anne’s Protestant brother-in-law and cousin William III became joint monarch with his wife, Anne’s elder sister Mary II. After Mary’s death in 1694, William continued as sole monarch until he was succeeded by Anne upon his death in 1702.

Despite seventeen pregnancies by her husband, Prince George of Denmark, she died without any surviving children and was thus the last monarch of the House of Stuart. Under the terms of the Act of Settlement 1701, she was succeeded by her second cousin George I of the House of Hanover, who was a descendant of the Stuarts through his maternal grandmother, Elizabeth, daughter of James VI and I.

The coin has been designed by portrait sculptor Mark Richards and depicts an elegantly decorated cameo portrait of Queen Anne. The reverse carries the usual portrait of Queen Elizabeth II by Ian Rank Broadley. There are four versions of the coin available all struck to a proof finish, one in 0.916 (22kt) gold, and three in Sterling (0.925) silver, one of which is gilded with 0.999 gold. Each coin set is presented in a sophisticated case with a Certificate of Authenticity and a beautifully illustrated booklet documenting the key milestones of Queen Anne’s life.