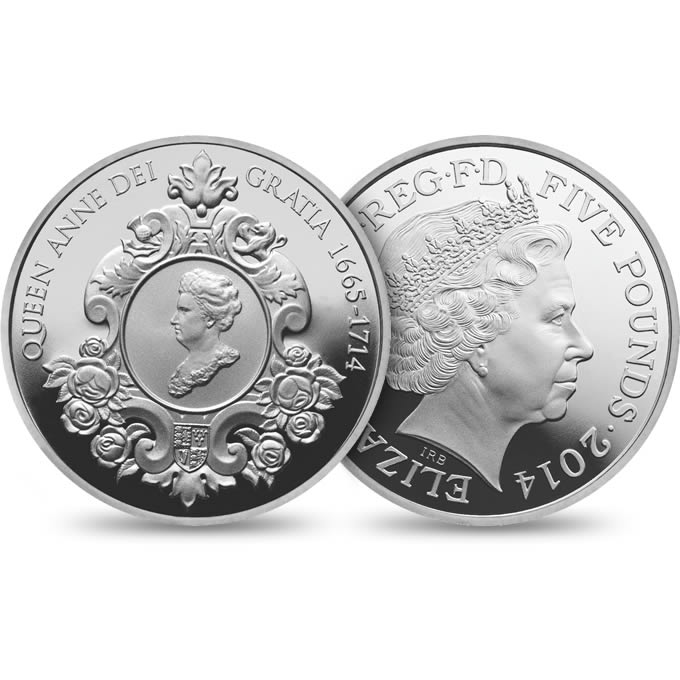 Artistic and cultural advancement, political stability and most notably a united England and Scotland – all achievements of Queen Anne, the last Stuart queen and the first Queen of Great Britain. You can celebrate the life and legacy of this influential woman with a £5 coin struck in her honour. Sculptor Mark Richards FRBS – also creator of the £5 coin struck for the wedding of The Duke and Duchess of Cambridge – has captured the style and refinement of the Queen Anne period in his eighteenth-century style miniature portrait, recalling an age of elegance. The details of the design gleam in sterling silver with an exquisite Proof finish.

The beautifully illustrated pack that houses this impressive £5 coin has been prepared with the help of The Royal Mint Museum, exploring both Anne’s reign and the fascinating numismatic tales that are still shared with wonder, including the story of how bullion captured from Spanish treasure ships was transformed into what are now very rare coins.

For 2014 The Royal Mint proudly strikes the Queen Anne 300th Anniversary £5 Coin to celebrate the first queen of Britain and the last Stuart queen. The intricately detailed design by Mark Richards FRBS is magnificent on this double-thickness coin, its details enhanced by The Royal Mint’s unrivalled Proof finish. Your coin is housed in an attractive case with a booklet produced with the help of the Royal Mint Museum. Act quickly for only 2,014 of these imposing coins will be available in this presentation.